OK Mom, Don’t Freak Out but… 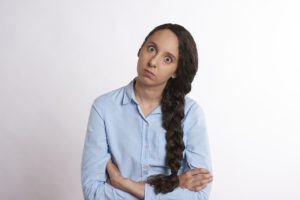 The other day my 13-year-old son approached me and said, “Okay, mom. Don’t freak out.

But here is the plan the guys are making. So just sit down right here and let me explain.”

I had to laugh.  It was a good approach and it also made a point.

The point is that it is hard for kids to ask for things or tell us things when we parents are so reactive.  His “ask” was nothing earth shattering. He wanted to go on a sleepover on a Friday night when he had a basketball tournament the next day. He knows how I feel about him getting enough sleep and he could picture my blood pressure rising and smoke coming out of my ears at the mere thought of this plan.

But when the details were fleshed out about where the sleepover would be (some houses afford more sleep than others, depending on how much parents supervise), and he had a chance to explain his part in the tournament (that he would only being playing in one of the three games, that his playing time would also be limited and that technically he could be home taking a nap by 2pm) I really had no need to freak out at all. In fact it was a plan worth considering…especially if I wanted to make the bargain that I’d allow it if he cleaned his room first.

His approach left me thinking about my own “inapproachability”.   I like to complain with other Moms that when I ask about school or ask how my sons how they are doing, I get ‘nothin’. One word answers.  Maybe I am part of the problem.

Talking to a reactive parent can be like walking in a mine field. Kids don’t want to share much because they don’t know when that parental judgement/reactivity thing is going to blow up and ruin the whole experience. Take this example:

Son: We were at the mall and David was drinking this Red Bull…

Parent mine detonated, we are off to the races before I even find out that my kid knew better than to have any and that I had ruined the whole story before I even got to the funny part.

So my point is this:   If we want our kids to tell us stuff and we want them to learn to think through their ideas and learn discernment and good judgement, we have to be less REACTIVE.  We need to show some restraint and hear them out, even if the sentence may have a trigger in it, like the mention of Red Bull.

We have to be able to listen to our kids and to respond, not react. When I saw this article on this specific topic, I knew it had my name on it. It was helpful to me, I so I’d like to share it with you.

What is Gender Diversity (and what does that mean for parents)?
March 15, 2021

After a Rocky Start, Three Tips to Ease Anxiety about the New Year
February 2, 2021

Mom to Mom: How to talk to kids about not doing drugs at different ages and stages (Video)
February 7, 2020

Mom to Mom: How Not to Take the Bait (When Your Kids Push Your Buttons) Video
February 4, 2020

Mom to Mom: How to Make Your House the One Where Your Kids’ Friends Want to Hang Out (video)
February 1, 2020
» TeleTherapy Now Available
Go to Top
Just Checking In.